Welcome to our September 2020 newsletter.

This month we highlight articles on anti-racist resources for secular Buddhists, SBN’s online course on secular Buddhism, and an important research study on meditation. The secular Buddhist glossary item for the month is SECULAR BUDDHISM. Finally, our feature is an excerpt from a new article by Stephen Batchelor on the threat of climate extinction.

Among Buddhists of all lineages, including secular Buddhists, the need to confront racism has become increasingly apparent in recent years. We’ve provided SBN readers with a list of books, articles, and websites which help us better understand the role and impact of systemic racism, as well as how we can become part of an anti-racist movement in our sanghas and in society as a whole.

The Secular Buddhist Network is offering a free online course, called After Buddhism: exploring a secular dharma, as a group learning experience. If you are interested in joining the course, click here. The registration deadline is September 5.

Despite its increasing popularity, there is much we do not know about how people practice meditation, including the optimal amount or ‘dose’ associated with particular outcomes. Consider joining a study to help researchers learn more about the impact of meditation. 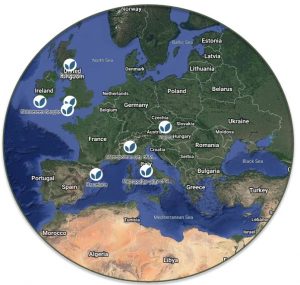 If you have a sangha, centre, meditation group, resource or website, or are an individual who would like to connect with other secular Buddhists, fill out our simple form and we can add you to our listing of secular Buddhist groups and individuals.

We’ve also developed an interactive map as a visual aid to encourage communication and also make it easy to see where we might find others travelling the same spiritual path.

Throughout its 2,400 year history, every time the dharma has spread to a new civilisation it has had to express itself in terms of its new host culture. In this way, it has realised new possibilities for enriching the human condition. Its arrival in the West is no exception. Secular Buddhism contributes to the process of embedding the dharma in western countries.

Western culture itself has moved markedly in a secular direction; it puts much greater emphasis on the concerns of human beings in this world and at this time, and demotes doctrines, practices and their institutions that refer to supernatural phenomena and other-worldly, timeless realms. Secular Buddhism seeks to express the dharma and its practice in this spirit.

Secular Buddhism is an informal movement that reaches into the early teachings of the Buddha to bring forward an interpretation of the dharma and its practice that meshes with the way today’s westerners think and live. In this way, it seeks to reissue the Buddha’s living tradition and identify affinities between it and the development of western thought and practice.

Secular Buddhism has no authoritative institutions and no orthodoxy. It consists of many ongoing conversations, small informal sanghas, and a number of websites across the western world. For a basic introduction to the key elements of secular Buddhism, click here.

– You can read the complete glossary here:
https://secularbuddhistnetwork.org/a-glossary-of-buddhist-terms-from-a-secular-perspective/

A secular Buddhist perspective on the threat of climate extinction

For orthodox Buddhists (like Hindus and Jains), not to be born and not to die are preferable to birth and death. As the end of suffering, nirvana, therefore, is also the end of life. While Mahayana Buddhists renounce nirvana and vow to be reborn out of compassion for others, they do so only as long as there are sentient beings still trapped in the cycle of birth and death. Once the bodhisattva has liberated all these beings, she too enters nirvana and is born no more. Although this may take an immeasurably long time, the same underlying principle holds true: not-life is preferable to life.

The four tasks, by contrast, demand direct engagement with life itself irrespective of any a priori beliefs about the origins and end of suffering or the nature of the self. By entering into a contemplative, empathetic, and existential relationship with the pain of the world, one seeks to respond with situation-specific compassion. The challenge is to tackle the crisis at hand, which may be unprecedented, and find imaginative responses that may not have occurred to anyone before. Taking into account the causal role played by psychological factors such as greed, dislike, and stupidity, one’s primary concern is to arrive at a response based on an understanding of the full range of particular conditions—biological, social, economic, religious, and political—that underlie and contribute to the crisis.

A traditional Buddhist meditation on death requires that you contemplate the certainty of your own death and the uncertainty of its time, and then dwell on the question of how, given this mortal condition, you should live now. Expanding this personal reflection to include Homo sapiens as a species, the meditation would look like this:

Extinction is certain. Either the human species will evolve into a form of life that we cannot now even imagine, or, if we manage to survive in a more or less humanoid form, we will be wiped out when the sun becomes too hot to sustain life on Earth in around a billion years’ time. Yet neither of these scenarios is certain. A massive meteor impact, a highly virulent disease, volcanic eruptions, nuclear devastation, or the repercussions of climate change could terminate human existence much sooner, possibly within this century.

Just as death focuses attention on what matters most for you as an individual, extinction focuses attention on what matters most for us as a species. In embracing extinction, we become intensely conscious that we are complex thinking, feeling, sensing, caring creatures who emerged from millions of years of evolution by natural selection. For self-aware animals like you and me, to contemplate extinction can open up an astonished, quasi-religious wonder at the grandeur of being alive at all.

Yet for Buddhists, is life worth living for its own sake? Is the emergence and evolution of life, from a tadpole to a silverback gorilla, to be cherished as a good in and of itself? Or is this ‘precious human rebirth’ to be cherished solely because it enables one to break free from the meaningless repetitions of samsara (from hell to heaven and back ad infinitum) and attain nirvana, at which point birth and death are no more?

– you can find the complete article here:
https://secularbuddhistnetwork.org/a-secular-buddhist-perspective-on-the-threat-of-climate-extinction/

Find a secular Buddhist community near you