This article is a slightly revised version of a chapter entitled ‘Religion, Socialism, and Secularization in Modern Japan: The New Buddhist Fellowship,’ The Bloomsbury Handbook of Japanese Religions, edited by Erica Baffelli and Fabio Rambelli, 189–192 (New York: Bloomsbury, 2021). It is republished here with permission.

The New Buddhist Fellowship (Shin Bukkyō Dōshikai; hereafter, NBF) consisted of roughly a dozen young scholars and activists, many of whom had studied under prominent mid-Meiji Buddhist scholars Murakami Senshō (1851–1929) and Inoue Enryō (1858–1919).[1] Principal among them were Sakaino Kōyō (1871–1933), Watanabe Kaikyoku (1872–1933), Sugimura Sojinkan (1872–1945), Katō Genchi (1873–1965), and Takashima Beihō (1875–1949). This group of seven would be joined in the following years by several others, including Suzuki Teitarō (Daisetsu) (1870–1966), a.k.a. D. T. Suzuki. While the NBF was overtly lay-oriented—in fact, strongly critical of traditional monastic or institutional Buddhism—several of the New Buddhists had been ordained as Buddhist priests, and most had some sort of Buddhist educational background, especially within the Nishi Honganji branch of the Shin sect.

In July 1900, a magazine called Shin Bukkyō (New Buddhism) was launched as the new movement’s mouthpiece. The first edition begins with the group’s ‘manifesto,’ which opens with an apocalyptic call to arms. Here, as elsewhere, the New Buddhists borrow from the discourse of Buddhist decadence that first arose with Neo-Confucians of the Edo period and was adopted by secularists and Shinto nativists in the early years of the Meiji period (1868–1912), before being internalized by early Buddhist modernists such as Inoue Enryō and Nakanishi Ushirō (1859–1930). And yet, as I have argued elsewhere, the New Buddhists occasionally pushed the envelope further, beyond the rather straightforward (‘Protestant’) critique of Buddhist ritualism, monastic corruption, and materialist hypocrisy. In so doing, they veered into more explicitly political—even radical—forms of critique.

‘Faith’ was a matter of particular concern for the New Buddhists (SB 2, 13: 398–404). Indeed, the very first and arguably most significant of their six General Principles states: ‘We regard a sound Buddhist faith as our foundational principle.’ In the third article in the inaugural issue of the journal, Katō Genchi takes up the theme, by first denouncing the ‘worldliness’ and ‘degeneration’ of the Buddhist monks and temples of his day, and then goes on to argue, somewhat against expectations, that far from being a matter of individual will or agency ‘faith’ is a product of religious and social evolution (SB 1, 1: 8–9). And yet, while the New Buddhists insisted that ‘faith’ must remain the foundation for New Buddhism, they were not calling for a return to the ‘stabilities’ of traditional belief.

While the root and foundation of religion is of certainty faith, the contents on this faith will depend on the particular period and circumstances. Thus, over time, religions have no choice but to gradually develop and evolve… As such, when we see people trying to bring back the old faith of Śākyamuni, Shinran, or Nichiren today in the Meiji period, all we can do is laugh at such a stupid and worthless idea (SB 1, 1: 9).

As Katō goes on to explain, while the contents of faith today cannot be fully specified, it is also not quite true that ‘anything goes.’ Any faith suitable to the modern period must pass the test of reason and ‘natural, experiential knowledge’. Thus, ‘reliance on supernatural beings’ is ruled out, as is anything that cannot be verified on the basis of information gleaned from our ‘ordinary, daily experience’ (SB 1,1: 9). Moreover, Katō insists that faith must be directly applicable to ‘practice’ or ‘projects’, thus moving towards the Marxist concept of praxis—or, at least away from the ‘Protestant’ separation between faith and works. Here as elsewhere ‘faith’ seems to act as an umbrella term denoting a sincere and enthusiastic commitment to the rational, ethical, and social aspects of New Buddhism; that is, practical wisdom, personal moral cultivation, and social reform (Yoshinaga 2011: 30). A closer examination of New Buddhist ‘sound faith’ reveals that it comprises the following elements: 1) knowledge; 2) respect for emotions, including poetic feelings; 3) a focus on this world; that is, setting aside transcendence and concerns about the afterlife; 4) pro-active engagement; 5) ethics; and 6) a positive or optimistic outlook (see, e.g., SB 1, 3: 82–89). Sound faith is, in short, the name for a particular, Buddhist, style of living; a commitment to fully investing in the practice (or ‘game’) of living a flourishing life according to generic Buddhist principles. 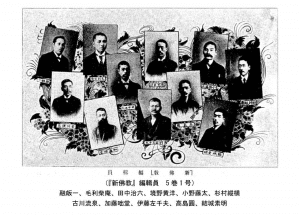 (The image above is from the New Buddhism journal that shows the central NBF members.)

A characteristic feature of the work of the New Buddhists is an unabashed affirmation of ‘this world’. While the modernistic emphasis on free inquiry and a rational, ethical, and scientific outlook were also in evidence among the figures representing the earlier Japanese Buddhist Enlightenment, the New Buddhists—some of them—took things much further in this direction, to the point where it could be legitimately asked what was left of ‘religion’ (or ‘Buddhism’) as normally understood. For instance, earlier Buddhist Enlightenment figure Nakanishi Ushirō had contrasted the ‘materialism’ of the ‘old’ Buddhism with the ‘spiritualism’ of the new, and, in similar fashion, the ‘scholarship’ of traditional monastic Buddhism with the ‘faith’ orientation of the new lay Buddhism. In contrast, the New Buddhists reverse these positions, so that it is the ‘old’ Buddhism that focuses on ‘spiritual’ matters, while New Buddhism is content with addressing ‘real,’ ‘practical’ issues of this life: poverty, hunger, and so on. Here, again, the New Buddhists move away from a Protestant/liberal focus on individual belief towards something more akin to modern progressivism.

Moreover, while the New Buddhists attempted to clarify a new form of ‘faith,’ in doing so they radically transformed the ordinary sense of the term, so that it became, as noted above, a synonym for ‘moral commitment’ or ‘sincere engagement’ (to use traditional Buddhist terms, ‘right intention’). Although they began their movement as self-identified ‘puritans,’ some, including Sugimura Jūō, were hesitant to push this idea too far, lest it begin to sound overly ‘renunciative,’ ‘severe,’ or ‘pessimistic.’ Here, again, their ‘puritanism’ was of a different sort than the ‘passive’ and ‘world-denying’ asceticism of the monks and priests; rather, it denoted a sincere, focused and ‘pro-active engagement’ with the world, one that was also not averse to seeking ‘pleasure’ (SB 1, 5: 159). This creates a fascinating tension played out in the pages of New Buddhism, between, on the one hand, a renunciatory impulse inherited not only from classical Buddhist monasticism but also from nineteenth-century liberal Protestantism and, on the other, an optimistic and this-worldly outlook emerging from Unitarianism, New Thought, Transcendentalism, and nineteenth-century progressivism.

Peter Nosco has argued that the Edo shogunate engaged in ‘pragmatic’ efforts to bring about something like a separation of religion and politics—which is of course a key feature of concepts of modern secularism (or ‘secularization’). And yet, the New Buddhists were in the main resistant to that separation, at least if it implied that religion must or should remain confined to the realm of the ‘private’ and the ‘individual’ (Teeuwen 2013: 5). In A Secular Age, philosopher Charles Taylor makes the case for immanence as a crucial foundation of secular modernity, invoking the ‘immanent frame’ as an understanding of the universe that constitutes a ‘natural’ as opposed to ‘supernatural’ order. And yet, the ‘immanent frame’ of the New Buddhists was both a natural and a social frame. Indeed, in their version of secular Buddhism, the most significant appeal of Buddhism was in fact its promise to address social, economic, and arguably political problems. In short, while the New Buddhist Fellowship rejected state-sponsored religion, they did not envision a privatization of Buddhist faith and practice. Quite the contrary, I suggest, they argued for the socialization of such—in line, perhaps, with alternative conceptions of modernity more familiar to radical than liberal (or conservative) social and political theory​. In several important respects, the New Buddhists of early twentieth-century Japan lay the foundations for later movements such as Socially Engaged and Secular Buddhism.