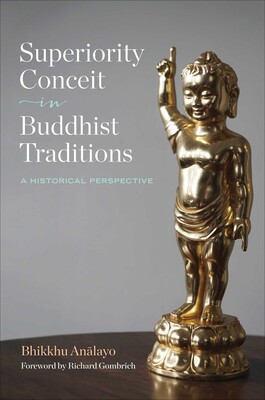 It is deeply disappointing when a scholar and teacher who has significantly contributed to our understanding of the key texts of Early Buddhism so completely misinterprets the objectives and practices of secular Buddhism, a very recent trend in the 2500 year history of Buddhism.

Bhikkhu Analayo’s prolific writings on a whole range of topics, in particular, his masterful analysis and explication of the Satipaṭṭhāna Sutta, have helped practitioners to gain a better understanding of core Buddhist insights as well as develop and enrich their meditative practice.

My spouse recently participated in a Barre Center for Buddhist Studies online course on Satipaṭṭhāna Meditation taught by Bhikkhu Analayo, which is based on his book, Satipaṭṭhāna Meditation: A Practice Guide . She found the course to be extremely challenging and helpful in deepening her approach to mindfulness meditation.

Unfortunately, while the overall purpose of Bhikkhu Analayo’s new book, Superiority Conceit in Buddhist Traditions: A Historical Perspective , is well-intended, his treatment of superiority conceit in Buddhist traditions – i.e. the tendency of Buddhists to devalue other Buddhists by asserting a privileged or superior point of view – is deeply flawed in two respects. First, Bhikkhu Analayo fails to identify what is perhaps the root cause of superiority conceits in Buddhism. Second, his analysis of a purported superiority conceit in secular Buddhism mischaracterizes the writings of Stephen Batchelor and ignores the ideas and practices of contemporary secular Buddhists.

Bhikkhu Analayo identifies four superiority conceits in Buddhism: the deeply-entrenched sexism which devalues the role of women in sanghas; the characterization of non-Mahāyāna Buddhism as inferior by Mahāyāna Buddhists; the Theravādin claim that their central doctrines reflect the teachings of the original Buddha; and the secular Buddhist assumption that all traditional forms of Buddhism are inferior to this new perspective.

Based on his analysis of the early Buddhist teachings found in the Pāli Canon and their parallels in Sanskrit, Chinese, and Tibetan sources, Bhikkhu Analayo makes a strong case that there is no justification for the first three conceits in Early Buddhism. He argues that ‘the various strands of negativity toward women that emerge….are not in conformity with the early teachings’ (p. 38). Similarly, when Mahāyāna Buddhists use the term ‘Hīnayāna’ to describe Buddhists who subscribe to Theravāda lineages as practicing an inferior form of Buddhism, this usage ‘has its origins in polemics and lacks a grounding in the historical reality of Indian Buddhism’ (p. 71). And finally, Theravāda Buddhism has its own conceit: the notion that it represents the original teachings of the Buddha. In fact, ‘comparative study shows that Pāli discourses are just as prone to reflect later ideas as are discourses of other transmission images’ (p. 101).

All this is good, and important to say as the tendency toward a superiority conceit is pervasive in Buddhism. Yet, Bhikkhu Analayo fails to recognize perhaps the most important factor which has led to a variety of superiority conceits in Buddhism: the view that monastic leaders and monks have a privileged access to the ultimate truths of human beings and reality.

As Stephen Batchelor and Winton Higgins have argued, after the death of Gotama, the historical Buddha, the adherents of his teachings – monks in monastic orders – took his pragmatic and ethical insights for how to live a flourishing life and transformed them into a metaphysical system based on so-called ‘truths’ about the world. This metaphysical turn included a notion that was not present in Gotama’s own teachings: the ‘two truths’ doctrine:

Only the monastics and religious leaders of the various lineages had supposedly privileged access to absolute knowledge of an ultimate reality. Their possession of absolute truths thus made them superior to their lay followers not just because of their unique knowledge, but by giving them the authority to determine the correct views and practices which lay people must follow. The development of a clerical elite as new spiritual paths have become institutionalized has of course occurred in other religions, such as the Abrahamic theistic religions.

But as different lineages and trends within Buddhism inevitably developed, this posed a problem. For if each lineage claims possession of the absolute truths which correspond to an ultimate reality, how do we know which lineage holds the correct view? How do we know which lineage has the practices which embody these truths and can lead to the complete cessation of suffering? In this context, it is natural that the monastic leaders and scholars of each lineage would claim that they possessed the correct understanding of reality and that others did not, that they were superior in the sense of having a unique access to the absolute truths.

While monastics have played a crucial role in preserving and developing Gotama’s teachings, the ascendance of monastic leaders and institutions thus went hand in hand with the formation of rigid orthodoxies and competing claims to having the most correct, the superior understanding, of Gotama’s teachings. This process also had a negative impact on the development of sanghas. The earliest sanghas, which tended to be more egalitarian, were transformed into hierarchical, top-down structures in which monastic leaders had complete authority.

I would argue that the superiority conceits which Bhikkhu Analayo discusses in the book are primarily rooted in the male-dominated, hierarchical monastic institutions which are integral to traditional forms of Buddhism. Bhikkhu Analayo’s failure to recognize this is a major flaw in his book.

What secular Buddhism are we talking about?

I found it quite surprising that Bhikkhu Analayo would include secular Buddhism in his discussion of superiority conceits in Buddhism. After all, the other three superiority conceits – gender discrimination, Mahāyāna Buddhists’ denigration of Hīnayāna Buddhism, and the Theravādin claim to represent the ‘original’ teachings – are historical trends which have profoundly shaped the development of Buddhism over the last 2000 years. On the other hand, secular Buddhism has only emerged in the last twenty years or so and was not even recognized as a separate trend until, independently of each other, Stephen Batchelor and Ted Meissner, the Executive Director of the American-based Secular Buddhist Association (SBA), began using that term to characterize a secular approach to the dharma. Ted’s podcast, the Secular Buddhist, was launched on May 7, 2009.

Because secular Buddhism is such a new phenomenon, one would think that Bhikkhu Analayo would be cautious in characterizing this trend while attempting to gain an understanding of how secular Buddhism is actually developing. Instead, he limits his discussion of secular Buddhism to the writings of one person – Stephen Batchelor – because he sees Stephen ‘as the foundational proponent of Secular Buddhism’ (p. 105). He further limits his discussion by focusing only on how Stephen’s interpretation of Gotama’s teachings is consistent with his (Bhikkhu Analayo’s) own understanding of Early Buddhist texts. The result is effectively a ‘hatchet job’ which not only mischaracterizes Stephen’s views but totally ignores the ideas and practices of contemporary secular Buddhists.

Stephen has had many discussions on this topic with Buddhists from traditional lineages. For the purpose of this article, what’s essential to note is that Stephen has never claimed to provide the definitive account of Early Buddhist texts nor has he argued that his secular interpretation is the superior version, in the sense of more closely capturing the truths of Buddhism. Instead, Stephen been quite clear that he developed his interpretation as part of his effort to discover the unique aspects of Gotama’s teachings which are relevant to us today. Stephen’s engagement with the Early Buddhist texts is aimed at developing an approach which facilitates individual transformation and a ‘culture of awakening’ in this life.

Thus, to take one of the teachings which Bhikkhu Analayo discusses in his critique of Stephen’s approach, the Parable of the City , Stephen has interpreted the sutta as offering a vision of how individual transformation in the context of the dharmic path is integrally connected to a ‘culture of awakening,’ a transformation of cultural and social relations. Stephen argues that the parable can thus be interpreted in secular terms. Bhikkhu Analayo disagrees, asserting that ‘….the central element in the parable of the ancient city to be the Buddha’s discovery of a path of awakening….’ (p.117).

So, who is right? Well, if one believes that there is a correct or superior form of Buddhism which represents the truths of Gotama’s teachings, then this is relevant question. But if, like Stephen and many other secular Buddhists, you reject that approach and instead see Gotama’s teachings as an ethical, pragmatic guide to life, then the key question is whether a particular interpretation of the text is helpful in facilitating human flourishing at an individual level as well as within the social sphere.

The latter, secular approach does not denigrate traditional views or interpretations; it does not claim that a secular approach is superior. Far from it. In his 2015 book After Buddhism Stephen offered ten theses of secular dharma. #6 says the following:

The practitioner honors the dharma teachings that have been passed down through different traditions while seeking to enact them creatively in ways appropriate to the world as it is now. (p. 321)

Where is the superiority conceit among secular Buddhist practitioners today?

This same stance toward traditional versions of Buddhism is widespread among secular Buddhists today.

For example, the Secular Buddhist Association has from the beginning of its formation in 2012 emphasized its deep appreciation for the variety of views and practices among traditional lineages. On their website, there is a page which has their guiding principles and values, including:

Secular Buddhism values the texts (Suttas and Sutras) of various forms of Buddhism as tools for study, learning, and practice. (And we hold gratitude to those who were integral to preserving and transmitting those Suttas and Sutras from their oral origins to the present-day written forms – monastics and others in Asia and its Diaspora.)

Secular Buddhism values individual preference and creativity on the forms of practice appropriate to them.

Similarly, since the Secular Buddhist Network website was founded in October 2019. we have rejected a sectarian approach based on a superiority conceit. Our aim has been to foster dialogue and a critical examination of issues related to secular dharma without trying to impose some new orthodoxy. In a recent article I argued that in discussing traditional and secular forms of Buddhism we need to take a position of ‘metaphysical humility’:

While I think that a secular approach is more appropriate because it facilitates human flourishing in this life, I am taking that position without asserting that, in some universal or objective sense, secular Buddhism is better than traditional forms of Buddhism. I agree with Seth Zuihō Segall who, in his book Buddhism and Human Flourishing,  argued that certain metaphysical issues may never be resolved and that it’s best to be open-minded and agnostic with respect to them; we need, in short, to assume a stance of ‘metaphysical humility.’

In the many discussions I’ve had with secular Buddhists or those interested in a secular approach, I have rarely encountered the view that secular Buddhism is somehow more correct or represents the truth better than other approaches. Many secular Buddhists started their practice in traditional lineages and still have a strong appreciation for the ideas and practices of those lineages. They come to secular Buddhism with a spirit of questioning and discovery that is very far from the superiority conceit that Bhikkhu Analayo has tried to attach to secular Buddhism.

It would have been preferable if Bhikkhu Analayo had attempted to learn about secular Buddhism as it is ‘on the ground’. Then, he could have engaged in a serious discussion with this approach instead of the simplistic rejection which is found in his book.